Thaler Media pulled off historic live coverage of the 2018 WAC with remote IP production and streaming. 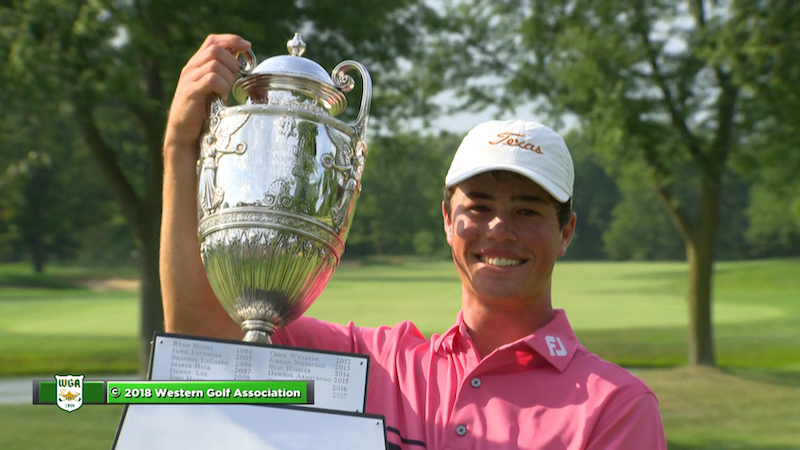 It all changed with the 2018 Western Amateur Championship—held July 30 through August 4, 2018 at the Sunset Ridge Country Club, in Northfield, Il, near Chicago—when Lowell Thaler, president of Thaler Media in North Palm Beach, FL made broadcast history by producing live HD coverage of the event’s “Sweet 16,” quarter-finals, semi-finals and championship matches on Friday, August 3 and Saturday, August 4.

Working closely with his client, the Western Golf Association (WGA), Thaler streamed 12 hours of live coverage to Golf Channel’s digital platforms, including golfchannel.com and their mobile app. The feed was also carried on the WGA’s Facebook page and website, thewesternamateur.com.

“We were able to produce this event very affordably—at perhaps a tenth the cost—compared to the overhead typically associated with a live broadcast-quality HDTV show by leaning heavily on NewTek gear, NDI networking, and LiveU’s transmission system,” Thaler said.

What’s more, Thaler produced the entire show from a studio a time-zone away, in his home town of North Palm Beach, FL, using what can best be described as a remote IP streaming production approach. 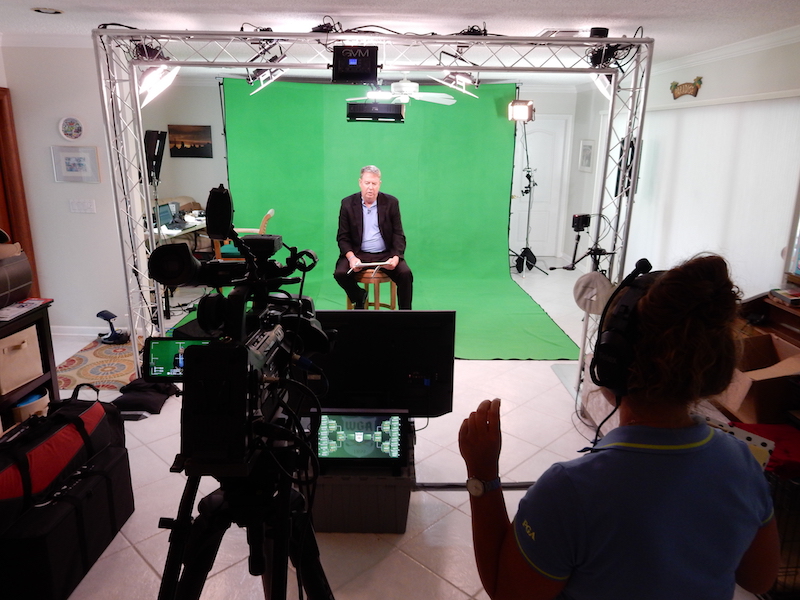 The only production personnel that Thaler sent to the Chicago area golf course were Producer Laurie White, Editor Eric Wagnon, four camera operators and a sound mixer. Three of the cameramen moved freely around the golf course, following the players from hole to hole to get the perfect shot.

Since there was no production control facility or mobile video unit on-site to switch and output the program feed, each of the camera operators wore a backpack containing a LiveU LU600 HEVC and LU500 IP-based transmission system. These modems with HEVC HD video relayed their respective camera video and audio signals via an IP pathway to a LiveU LU2000 multi-output server situated at a master control facility 1,300 miles away in South Florida.

Much of the golf action was covered by multiple cameras, and occasionally, cameramen could be seen in the live shot trying to capture it from a different angle, which gave the production a fresh, dynamic look. This was state-of-the-art photography; not the shaky-cams or web-cams all too common on streaming platforms. All of the camera work was done in remarkably steady handheld mode, with excellent shot composition, using high-end Sony F55 cinema-grade cameras.

A small remote talk show set was set-up inside the Sunset Ridge clubhouse. The program’s co-anchors—David Marr III and Scott Walker—sat at the desk to deliver color commentary and game analysis.

A virtual set filled the greenscreens behind them and in front of their desk, making it appear as if they were enmeshed within a virtual studio that was far larger than the actual physical space. This was one of the virtual sets that Thaler had chosen from the NewTek virtual set collection that came with the TC1. 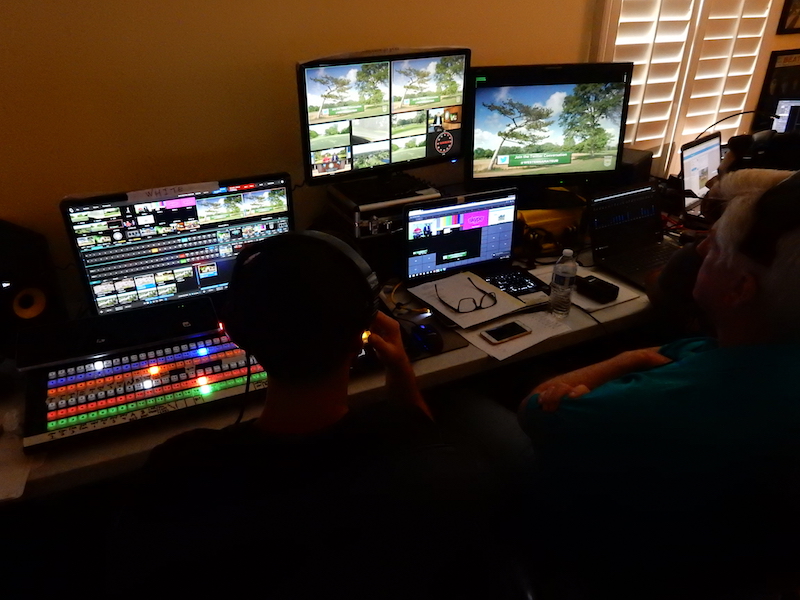 The master control facility, which consisted of a two-room suite, can be described as a completely non-traditional, ad hoc broadcast setting. This South Florida site was crewed by nine people, including the producer, director, TD, audio mixer, live graphics and replay teams.

One of the master control rooms served as a main studio where a third anchor, Craig Dolch, sat in front of a green screen to provide additional commentary. A different but complementary NewTek virtual set was keyed into that background to distinguish it from the first. After Dolch concluded his commentary, he would toss it back to the anchor team at the Chicago clubhouse. 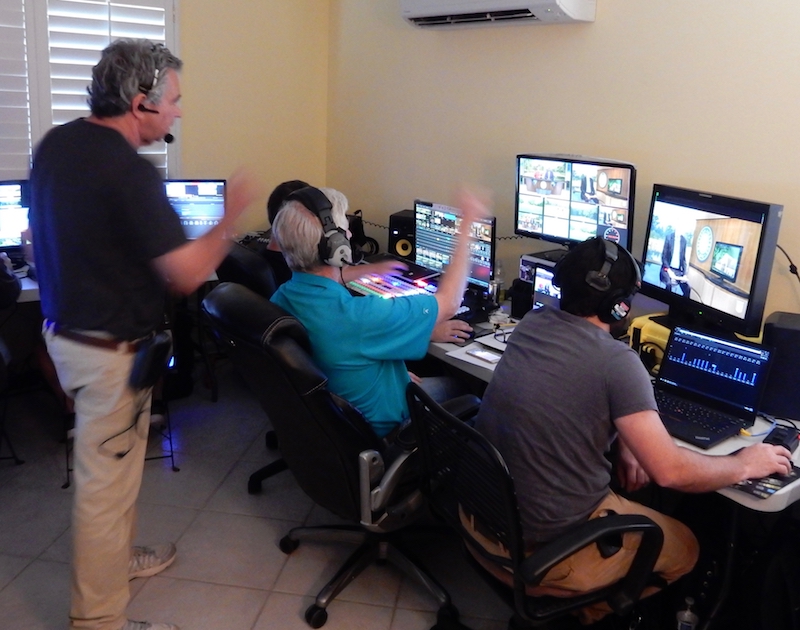 The other room at Master Control housed a NewTek TriCaster® TC1 IP production switcher. As a frame-accurate 4K UHD/60p-capable switcher with an all IP architecture, the TC1 is a 16 input, 4-M/E switcher with multi-bus mix/effects, animated titles and transitions, chromakey, built-in video servers, clip players, graphics channels, a virtual set system, and more. The TC1’s virtual set generation and editing capabilities were maximized on this production.

The production control workflow also included a NewTek 3Play® 3P1 replay system, which allowed a replay operator and replay producer to provide SLOMO replays, and playback of aerial footage captured by the camera on a drone flying over the golf course throughout the broadcasts.

A NewTek Live Text CG system running on a laptop provided lower third supers and other on-screen graphics. And a NewTek Live Panel audio mixing control panel was used to combine all of the audio sources—including camera audio and natural/ambient sound—into the final program audio mix. 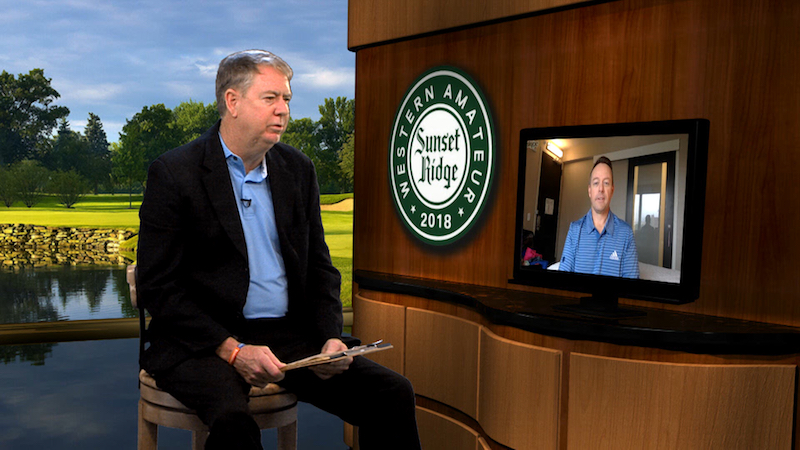 “Using a simple, streamlined, get-it-done approach, we were able to cover an event that was never covered live before,” said Thaler. “The key was the way we were moving signals between the two sites in real-time, so that the Chicago and Florida production teams could work together seamlessly as if they were both at the same site.”

This included the use of the four Skype channels on the NewTek Talk Show to send our TC1’s program output as a ‘return’ feed to provide essential reference monitoring to the Chicago team. This mix-minus audio feed was then split to each of the anchor’s headsets, essentially serving as an IFB. TalkShow also enabled Skype interviews with guests to be fed back to the TC1 in master control.

The end-to-end LiveU transmission system was critical technology tying the two remote groups together because this was the method for relaying the camera “iso’s” and audio back to special LiveU LU2000 server in the control room.

This Linux server relayed the camera signals via NDI® for video over IP networking to the TC1 switcher where the TriCaster operator could mix these live camera inputs with all the other production elements, including features, such as historical vignettes and player profile clips.

“Golf tournaments present logistical challenges to traditional broadcasts because there are essentially miles of wiring and cabling that have to be run to support acquisition,” said Fernando Iglesias, Midtown Video’s VP of Operations. “It wouldn’t be feasible or cost-effective to do these cable runs, or to deploy a high-end HD production truck, for an event like this.”

“But with the LiveU transmission system, the broadcast cameras connect directly to backpacks so that the cameramen can move freely around the golf course without any need for long-distance, labor-intensive fiber runs,” Iglesias explained. “Combined with the NewTek production and NDI networking systems, this IP-based approach is extremely cost-effective compared to traditional HD-SDI broadcast.”

Midtown Video also provided technical support needed to turn one of the LU600 HEVC units into a “data bridge” so that the Chicago crew would have a solid Wi-Fi hot spot on the golf course. This enabled them to have dedicated bandwidth to ensure they could reliably send a Skype program return feed to the Chicago team—a critical transmission connection—and not rely on the venue’s existing Internet bandwidth.

“While it’s true that NewTek and LiveU products are game-changers that are making high-end broadcast production accessible at a much lower price point, it’s still important to have the support of a supplier like Midtown Video that really understands how to implement unique workflows that achieve the production’s creative and technical goals,” said Debby Miller, co-president of Midtown Video. 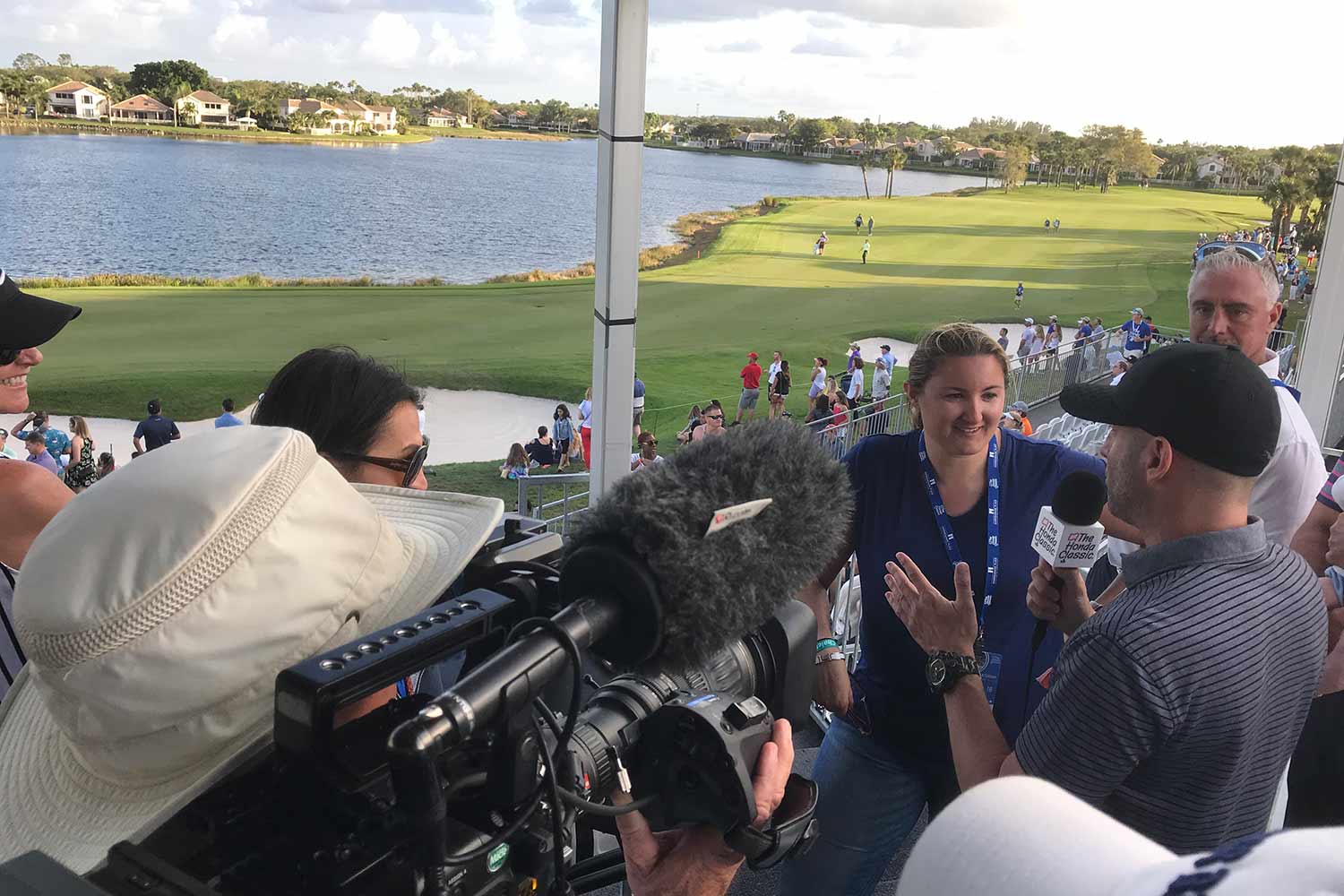 According to George Klippel, Sales Director, Channels for LiveU, Inc., “Many of the products and technologies that enabled this live streaming production were either not yet available or ready for primetime, just a few years ago. Today, by pairing LiveU and NewTek technology, Thaler Media was able to produce a broadcast quality product as if they were on-site with a full production unit and crew, all while considerably reducing the costs and streamlining the workflow.”

For Lowell Thaler, the success of this remote IP streaming production is a proof of concept for a vision he’s had for a long time. He plans to apply this proven methodology to a wide range of future events that would otherwise never be feasible or cost-effective to produce or broadcast live.

“Our 2018 Western Amateur live stream has proven to skeptics that live shows and events that have never been broadcast before can now be produced and streamed, with high-end broadcast quality, very affordably, reliably, and successfully, and for video producers like me, that opens many doors of opportunity.”