The University of Miami Baseball team is using a new pitching analysis system that could catapult the team to Omaha for the College World Series, a goal of their beloved coach Jim Morris, set to retire after 25 winning years. University of Miami Baseball home games are played on campus at the 5,000 seat Alex Rodriquez Park at Mark Light Field in Coral Gables, Florida.

To enhance the system with high-image quality cameras worthy of in-game coverage, UM called on Midtown Video’s CTO Jesse Miller. He specified four HD Panasonic Pan/Tilt/Zoom cameras with 30x optical zoom lens. Every movement of every pitch is recorded from at least two angles, offering a comprehensive and detailed view of the pitcher’s technique. Video images can then be studied for coaching and player review sessions. 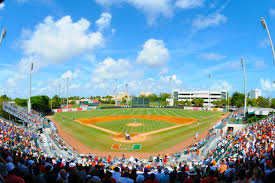 The cameras are contained in tinted ‘CoolDome’ active cooling enclosures for outdoor protection.  They are controlled remotely from the press box with a sub-compact joystick controller and quad-split monitor system. While the dugout and home plate cameras are close enough for copper, fiber optic systems from AJA and SerialComm extend signal and control to the outfield camera.

Since 1973, UM has been of one college baseball’s elite with 25 College World Series appearances, four National Championships, and 29 NCAA Regional titles. UM Athletic director Blake James calls Morris “a legend”. In his final year as coach, Morris hopes to get one more national trophy.

Midtown Video is a leading video and audio systems integrator located around the corner from the U and a South Florida technology innovator for more than 30 years. One of the founding partners is a proud ‘Canes fan and UM graduate.