The Recruiting Rotunda serves as a portal that leads to the coaches’ offices on the second floor of UM’s Hecht Athletics Building. When coaches escort new recruits into the Rotunda Experience, they use a wireless control panel to activate the multimedia show, including firing up the fog screen and selecting the video replays and highlights to present.

Recruits begin their journey by walking down a darkened, 60-foot corridor lined with flashing LED lights that illuminate a visual history on the walls, including the championship years. At the end of the hallway, they see and hear championship highlights projected onto a fog screen that shrouds the entranceway. The “Miami Hurricanes Football Recruitment Experience” is one of many projects that University of Miami Athletics Department has entrusted to Midtown Video in what has been a very long and rewarding relationship.

UM contracted Midtown Video to provide the immersive Pro-AV experience that is a key element of a much bigger renovation of the second floor of the Hecht Athletics Center. UM Athletics staff advised Midtown Video that the Recruiting Rotunda would serve as a gateway that takes recruits from the lobby to the area that houses the football coaches’ offices, media screening rooms, and other administrative facilities.

Rather than just take visiting recruits right into a coach’s office for their interview, the Rotunda Experience serves as a gateway that transports recruits into the world of the Miami Hurricanes. It drums up excitement and anticipation for what will hopefully be a much more fruitful recruitment negotiation.

From the start of construction (in the fall of 2019), Midtown Video’s expert systems integration team—led by the company’s General Manager Jesse Miller—needed to be on-site to confer and coordinate with various tradespeople, including building contractors, electricians, and plumbers.

Midtown Video then directed the installation of key utilities, including electrical outlets, cabling/conduits, the embedding of Stealth Acoustics audio speakers inside the walls prior to plastering, several massive air conditioning units, and plumbing to support the fog screen. They also coordinated with UM’s IT department to use their secure campus network. In short, Miller and his team directed the installation of all the infrastructure their design plan required to realize this fully immersive, multimedia experience. 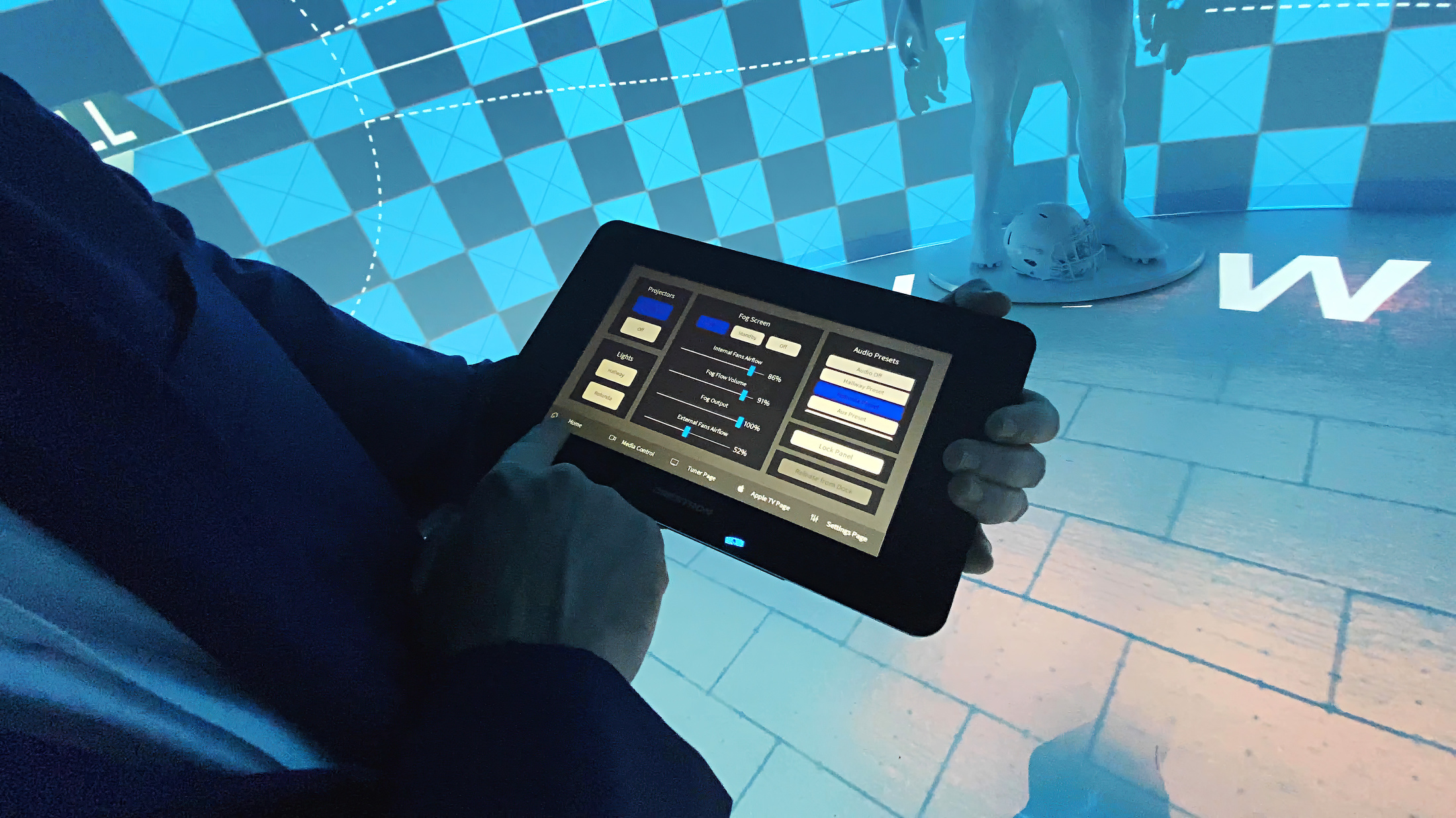 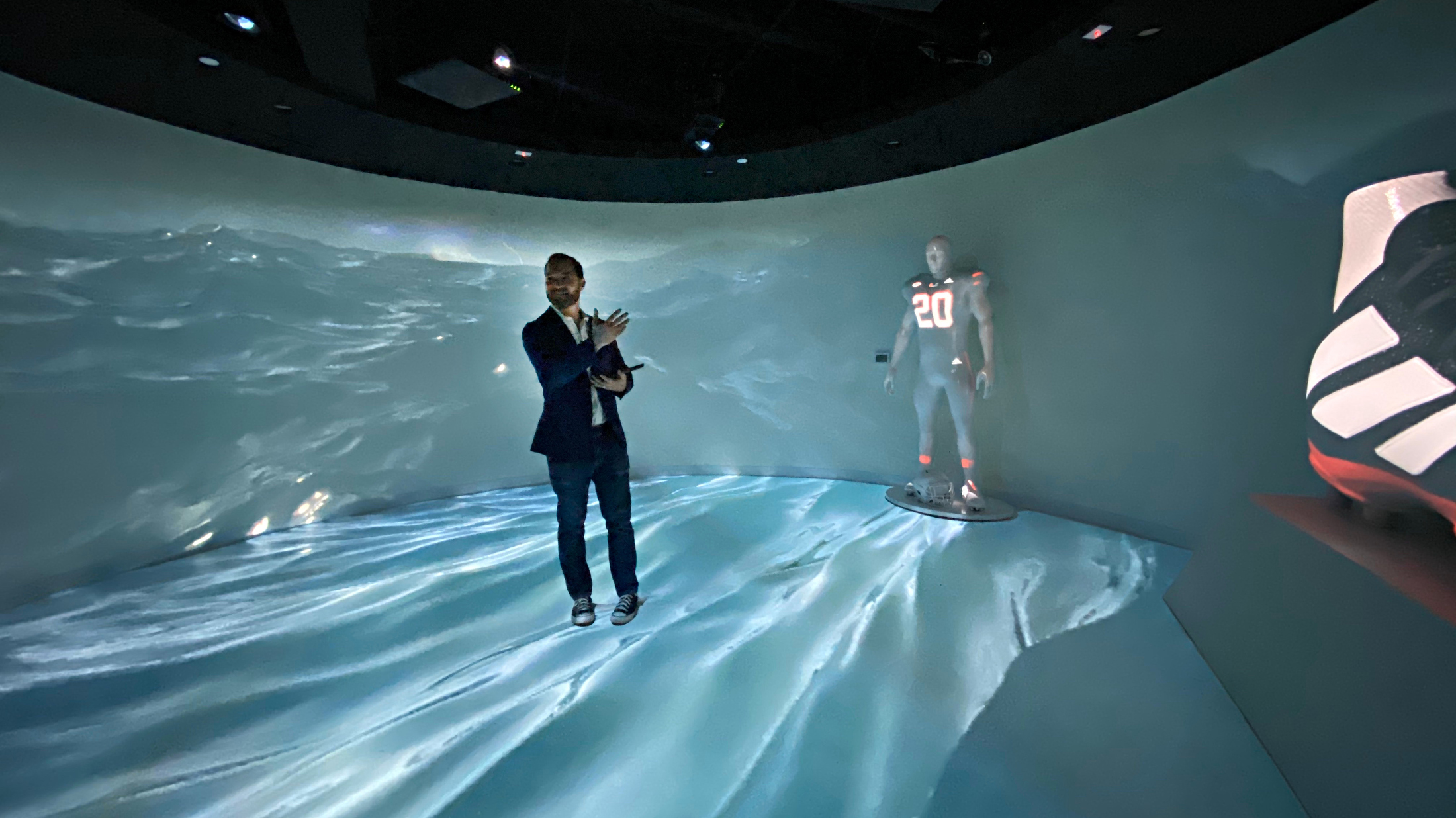 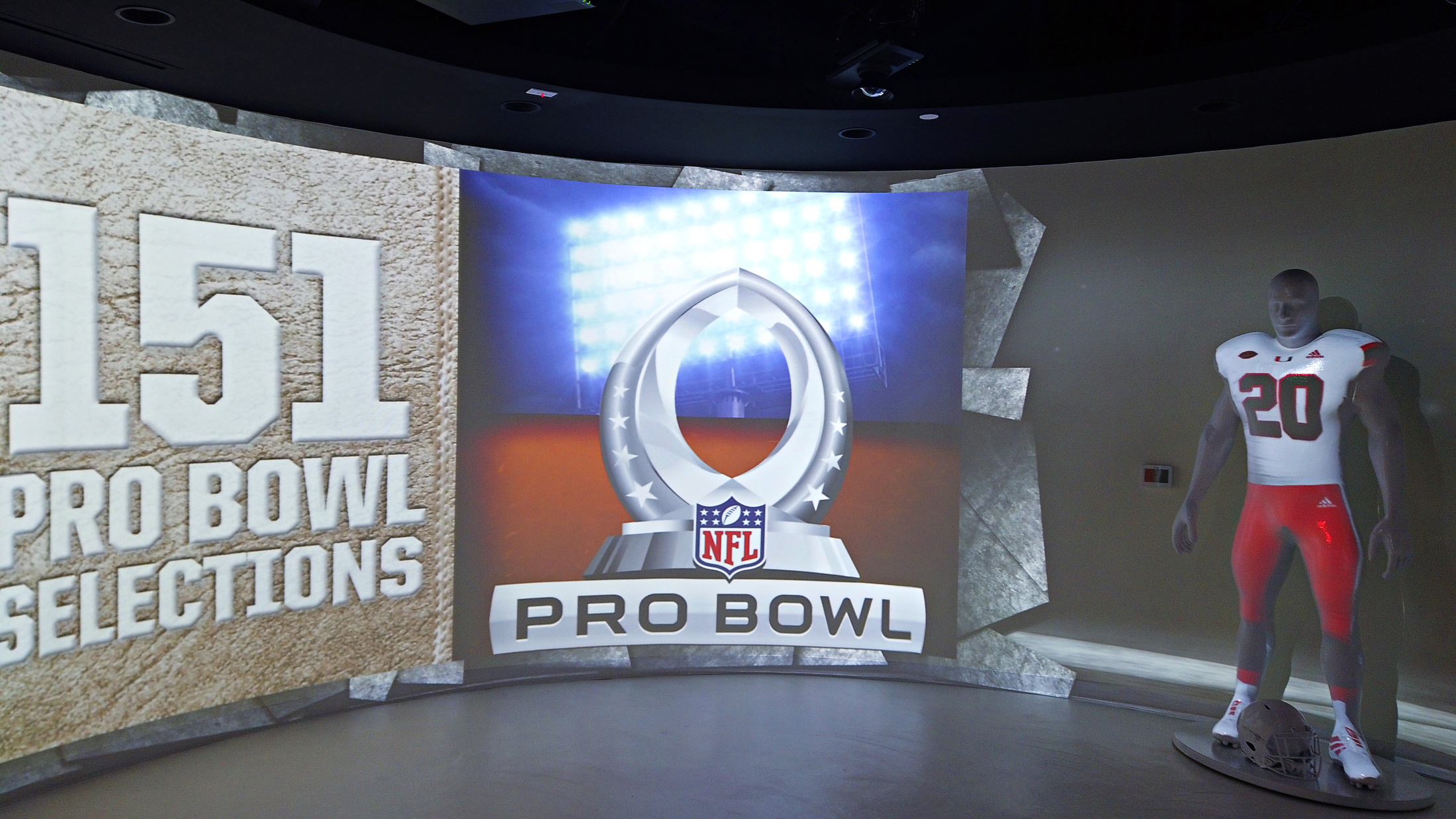 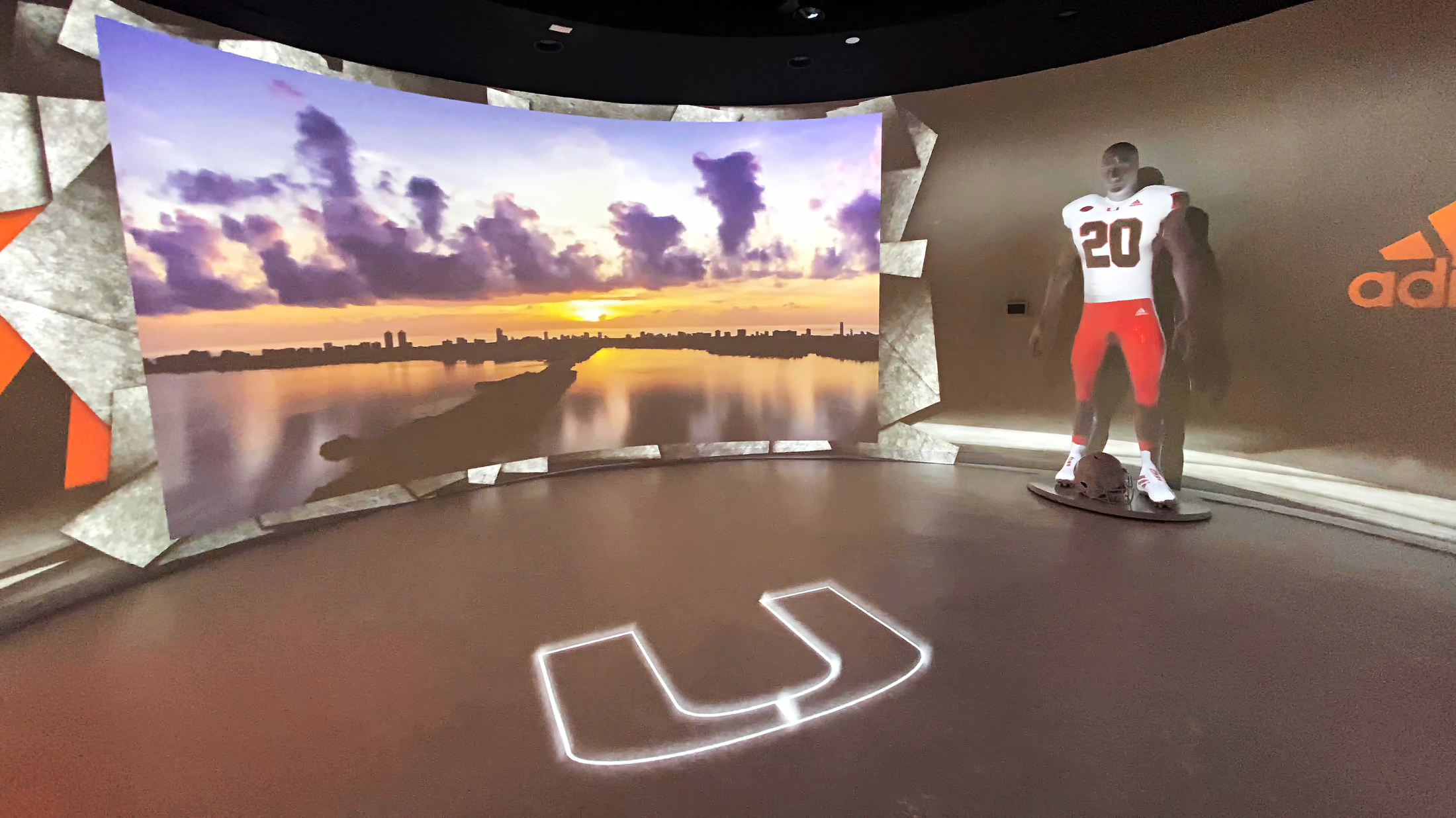 Prior to meeting his new recruit, the UM football coach uses a Crestron wireless touchscreen control system—custom programmed by Midtown Video—to turn on key elements of the attraction, including the LED lightshow and the fog screen. He also selects the video playlist he wants to show the recruit from many high-res media assets residing on the Resolume Arena Media Server.

As the coach and recruit walk down the 60-foot long, 7-foot wide corridor, LED lights illuminate words that are on one side and championship years on the other, with each LED choreographed to light up just as they pass by. Ahead visitors see a large display of Miami Hurricane’s five national championship highlights being rear projected onto a fog screen at the Rotunda entrance.

Within the Rotunda, which is a darkened, 22-foot diameter, cylindrical theater, nine 10,000 lumen Panasonic PT-RZ970 DLP laser projectors mounted along the perimeter of the 9-foot high ceiling focus a total of 90,000 lumens of projection. Five projectors paint the walls, while four paint the floor. This creates seamless imagery, such as video of dramatic football moments and team camaraderie, while a team banner cycles around the walls.

On one side of the Rotunda, the team’s uniforms are 3D projection-mapped onto a 7-foot plaster statue of a football player. The uniforms change continuously to show the team’s many Adidas-branded looks. On the other side of the rotunda, the team’s multiple sneaker designs are 3D mapped onto a 7-foot long sneaker statue. The experience is augmented by multichannel surround sound booming from Stealth Acoustics audio speakers and subwoofers which produce sound from their hidden locations within the walls. At the end of the five-minute presentation, attendees exit through a side door into the office area. 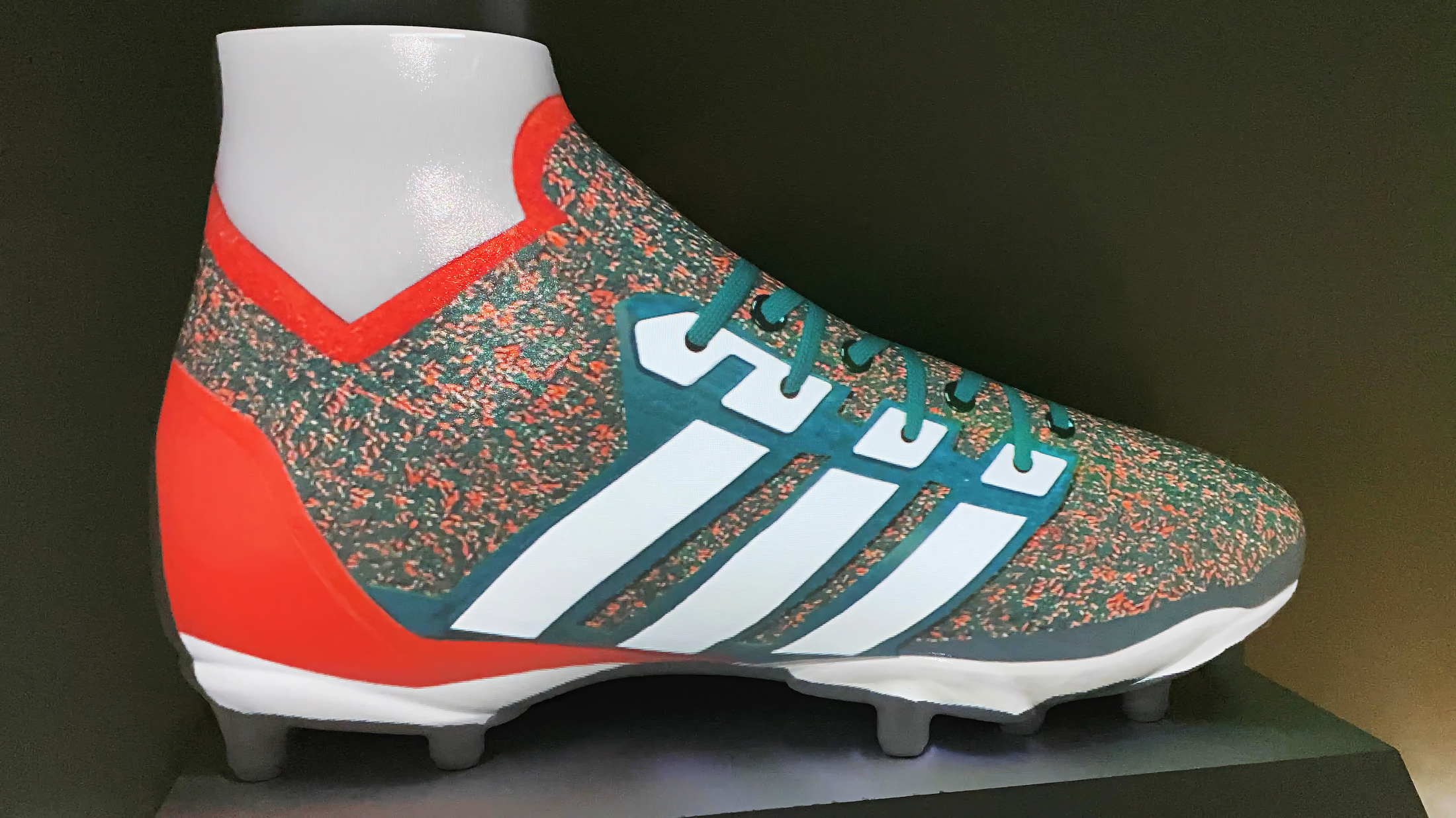 “Our goal was to implement UM’s vision as closely as possible. But the sophisticated technology and AV systems integration were our responsibility,” said Midtown Video GM Jesse Miller. “In order to create such a powerful, flawless, and credible immersive experience, many complex technical challenges needed to be addressed and solved.” For example, the projectors needed to be angled carefully so they didn’t cast shadows on each other or the visitors, while avoiding shining directly in people’s eyes.

Since the projector angles needed to be “locked” prior to construction, it would be problematic if adjustment was needed after construction and installation. The Midtown Video engineering team used Cinema 4D software to plan the angles of the beams and the configuration of the projectors. Three Datapath FX4-SDI 4K Display Wall Controllers split the 4K DisplayPort outputs coming from the Resolume Arena Media Server, which in turn feed up to four projectors.

Creation of the fog screen involved a four-foot wide box, with a pressurized water line running into it, and a water drain line running out of it. Each day, a five-gallon water tank fills up and when the system is turned on, it vaporizes the water, creating a vertical sheet of fog that acts as the rear projection screen.

Coming through on-time and on-budget, Midtown Video’s winning installation team and CVH Visuals were on-site to assist Miller with the build-out, including projection design and mapping.

By all measures, the Recruiting Rotunda featuring the “Miami Hurricanes Football Recruitment Experience” has been deemed a success by University of Miami Athletics Department personnel as well as the prospective recruits that have experienced it.

“We give these kids a great experience when they come on campus,” said Andy Vaughn, Director of Player Personnel for UM Athletics. “You want them to leave with that great feeling that ‘I saw something new’, or ‘something different’, and ‘I was impressed in some way’. And I think this has really done that for us.”

According to DeMarcus Van Dyke, UM Athletics’ Assistant Director of Recruiting, “It was amazing…I was like a kid in a candy store… Just to see the lights and the replays showing and seeing the uniforms change…”

Lastly, Leo Ramos, Director of Brand Marketing for the University of Miami Athletics Department, Miami, FL said, “You really know that a recruit was blown away when they smile, because for the most part, they try to play it as cool as possible.”

According to Midtown Video GM Jesse Miller, “Businesses, institutions, universities—they’re all competing for positive mindshare, and the way they can set themselves apart is to create an immersive multimedia experience that’s so impressive that people go away with it burned in their brain. Midtown Video is committed to focusing our expertise, ideas, and technology to create immersive AV experiences.” 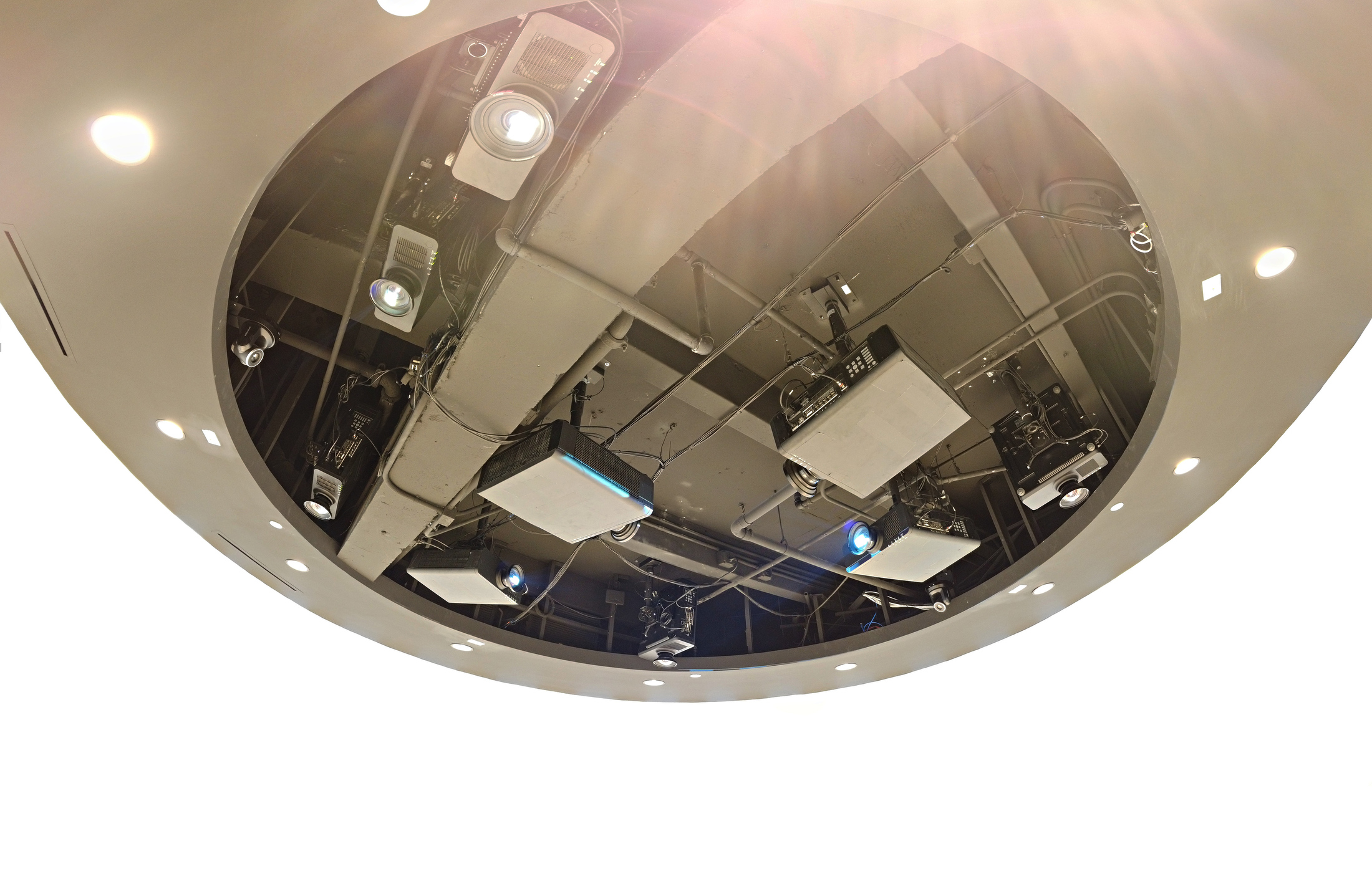