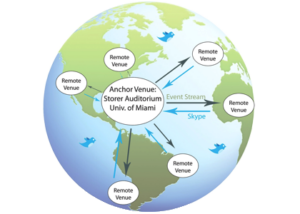 Sanjeev Chatterjee, a Miami-based, award winning documentary media maker and teacher had been working on an international documentary film titled On Cities for several years. A short film by the same name was ready for a public screening and so he began designing a gathering that could allow for audiences to watch the film across borders and discuss the issues in an appropriate format for a film screening for the digital age.

His first step in this ambitious project was to engage the team at Midtown Video for technical support. The second was to begin organizing a film screening in Miami that would combine a panel of experts and city dwellers. Next, he reached out via e-vites for partners in different parts of the world who then agreed to hold parallel screenings and join the conversation using Twitter, Skype, and TelePresence. The plan was to use a multi camera live video production of the main event in Miami and stream it live on the Internet.

The event, On Cities, was held on October 22, 2012, anchored at the Storer Auditorium, University of Miami and was billed as A Virtual Gathering Featuring Non-Verbal Documentary Film About Life in Cities and Audience Engagement focused on a Better Urban Future.  The purpose was to engage viewers around the world in conversations about the future of life in cities and serve as a platform to launch a multilingual film contest that will incentivize digital filmmakers to tell stories about life in cities where they live. 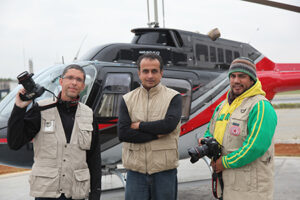 The event was replicated simultaneously in remote locations around the world where a Host and an audience were able to screen the film and receive Skype video calls enabling them to be in constant contact with the anchor venue via Skype and Twitter. Each site had two screens which displayed the movie, the anchor venue and the Twitter feed.

According to Sanjeev Chatterjee, “Midtown provided all the multicamera video production technology and services to stream the program live.  I was a guest on the .videoshow with Jesse Miller (jtown.tv) last year and have used their services in the past. However, this was really our first collaboration. They also provided Twitter integration which was a great help.” He added, “I feel that through their monthly .videoshow program, they have truly developed genuine expertise in the arena of high end and professional quality webcasts. They have really built their reputation beyond the broadcast realm. I have been consistently impressed and look forward to doing more virtual events with Midtown Video.”
The film and the discussion were segmented into three sections. The past – how and why ancient cities lived and/or died. The present – what are the challenges facing contemporary cities.  And the future – what might cities of the future look like?  Several brief presentations by thinkers and media makers were featured in addition to the film. This virtual conversation provided the ability for 20+ locations around the world to connect and have a common conversation mediated by available technology.

To learn more about On Cities visit the website at http://knight.miami.edu/oncities/, to learn more about multi-camera video production and streaming services contact us, Midtown Video online at https://midtownvideo.com/contact/.