Renato Lombardi was the Director of Photography on “An Unbreakable Bond,” the story of Nick and Marc Buoniccoti’s efforts to fight paralysis.  The film debuted at the Miami International Film Festival on March 12, 2014.  Emilio Estefan produced, directed, and scored the film.  Having shot with the Canon C300 at 1920×1080 23.98 fps, Renato was excited to attended the premier at the Olympia Theater at Gusman to see how the footage would hold up on the big screen.  He was pleased with the results, and found that scenes shot with more cinematic lenses including the Canon Cinema Primes were noticeably better looking compared to scenes shot with DSLR zooms. 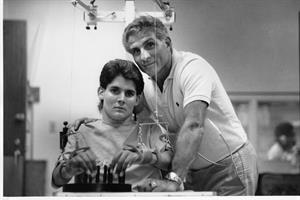 Shortly after the debut of the film, Midtown Video and Sony loaned Renato a PMW-F55 4K camera for evaluation, with Sony’s 4K Prime Lenses.  As part of the evaluation, Renato compared the F55 to the C300 (setting both cameras to 1080 59.94i).

The results are enlightening.  When set to 2000 ISO, there is almost no noticeable difference in the noise level between the two cameras.  Using similar lenses (the Canon Cinema Prime 24mm on the C300 and the Sony 25mm 4K Prime) and the same test subject (ambient light, a white paper cup set up on dark wood furniture to create a high contrast image), both cameras held up very well.

“At 2500 is when a shooter might begin to notice the difference, but a producer might not notice until about 4000 ISO,”  he said.

Renato also commented that even though there is noise in the dark areas on the image of the both cameras, the noise appeared smoother and more tolerable on the native 1250 ISO F55.

“Even though you expect less light sensitivity from the global shutter of the F55, it outperforms the 4K sensor on the C300 when taking 1080 HD-SDI out of both cameras into the same monitor.  Also I was surprised by the 3 hour run times from the Olivine batteries,” he said, indicating that the performance may decrease when using the external Raw Recorder.

I joked that the difference could probably be measured by about $15,000.00.

Still, the C300 is a great camera for cinematic production.  Renato was happy with the pictures on “An Unbreakable Bond,” and indicated that the glass could be a more important decision than the camera.

“The C300 looks decent on the big screen, but you have to be careful with DSLR Lenses.  In situations where the focus is critical, especially movements like pushes and slides, any slight adjustment by the cameraman becomes more noticeable.  And of course, when shooting with higher quality glass the image registers much better on the screen’s edges,” Renato said.