Rockin’ It Like a Hurricane
By Megan A. Dutta (Systems Contractor News)

The University of Miami’s (UM’s) Hurricanes Athletic Department has five core values: integrity, excellence, passion, respect, and family. These values are impressed on all UM student athletes, both current and future. The university’s football team was looking for a way to showcase its values and success for future recruits and came up with the idea of creating a dynamic “Recruiting Rotunda” to immerse prospective recruits in the sights, sounds, and excitement of the celebrated team and its five national championships.

A Journey, Not a Destination

According to Midtown Video general manager Jesse Miller, the company had recently completed a $2 million upgrade of UM’s sports broadcast studio for the launch of the ACC Network, an ESPN property. The work done on the Recruiting Rotunda “was the result of several years of relationship development where we had earned their trust by delivering efficient, high-value systems at high value with dependable support.”

Getting Started on the Vision
When coaches escort new recruits into the rotunda, they use a Crestron wireless touchscreen control system to activate the multimedia show, including firing up the fog screen and selecting the video replays and highlights to present.

Recruits begin their journey by walking down a darkened, 60-foot corridor lined with flashing LED lights that illuminate a visual history on the walls, including the team’s championship years. At the end of the hallway, they see and hear championship highlights projected onto a fog screen that shrouds the entranceway.

Construction on the Recruiting Rotunda began in the fall of 2019. Midtown Video’s team, led by Miller, was on site daily to confer and coordinate with the various contractors, including electricians and plumbers. The team at Midtown Video directed the installation of key utilities—including electrical outlets, cabling/conduits, Stealth Acoustics audio speakers embedded in the walls prior to plastering, several massive air conditioning units, and plumbing to support the fog screen. They also coordinated with UM’s IT department to use their secure campus network. In short, Miller and his team directed the installation of all the infrastructure required to realize this fully immersive multimedia experience. 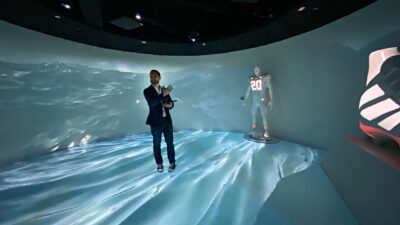 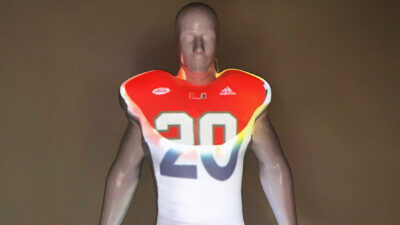 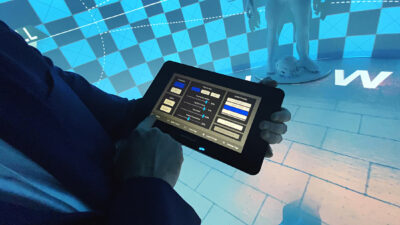 Within the rotunda—which is essentially a darkened, 22-foot-diameter cylindrical theater—nine 10,000-lumen Panasonic PT-RZ970 DLP laser projectors are mounted along the perimeter of the 9-foot ceiling, focusing a total of 90,000 lumens of projection. Five projectors paint the walls, while four paint the floor. This setup delivers seamless video imagery of dramatic football action and team camaraderie, while a team banner cycles around the walls.

The multichannel video blending of all these elements is handled by Datapath’s versatile Fx4 processors. Since the projector angles needed to be locked in prior to construction, it would be problematic if adjustment was required after construction and installation. The Midtown Video engineering team used Maxon Cinema 4D software to plan the angles of the beams and the configuration of the projectors. Three Datapath Fx4-SDI 4K Display Wall Controllers split the 4K DisplayPort outputs coming from the Resolume Arena Media Server, which in turn feed up to four projectors.

“To see Datapath play its part in this stunning and innovative recruiting experience is very satisfying,” said Greg Dieckhaus, Datapath senior sales manager, Southeast and Mid-Atlantic U.S. “Midtown Video has done another stunning job in demonstrating what is possible with today’s technology.”

The projection mapping part of the project was, perhaps, the most difficult challenge Midtown Video faced, according to Miller. “Simulating projection beams can only get one so far. Until we could install the nine projectors in the newly renovated rotunda, we couldn’t be certain that our projection mapping calculations would precisely match our expectations in real life,” he said.

“There were a few mid-project recalculations to account for physical conditions, viewer path, and overall experience, where we actually changed the mounting locations of a projector or two,” he added.

The uniform projection experience is augmented by multichannel surround sound booming from Stealth Acoustics audio speakers and subwoofers, which produce sound from their locations hidden within the walls.

With so many devices—including 10 projectors, seven audio zones, and more—requiring unified control, Midtown Video needed a reliable solution they could count on. “Crestron is my favorite brand for wild control systems,” Miller said.

By all measures, the Recruiting Rotunda and its Miami Hurricanes Football Recruitment Experience have been deemed a success by University of Miami Athletics Department personnel, as well as the prospective recruits who have experienced it.

“We give these kids a great experience when they come on campus,” said Andy Vaughn, director of player personnel for UM Athletics. “You want them to leave with that great feeling that ‘I saw something new,’ or something different, and ‘I was impressed in some way.’ And I think this has really done that for us.”

“You know that a recruit was really blown away when they smile because, for the most part, they try to play it as cool as possible,” added Leo Ramos, director of brand marketing for the University of Miami Athletics Department.

“This project is about creating an experience—immersing an athlete in celebrations, potential, and wonder,” concluded Miller. “The city of Miami has so much beauty for content, the University of Miami Football Program has so much success, and Jason Layton and his design team at [UM] identified an incredible way to communicate all of that to potential recruits. Midtown Video was just lucky to be selected to expertly convert that dream into a technical, physical reality.”